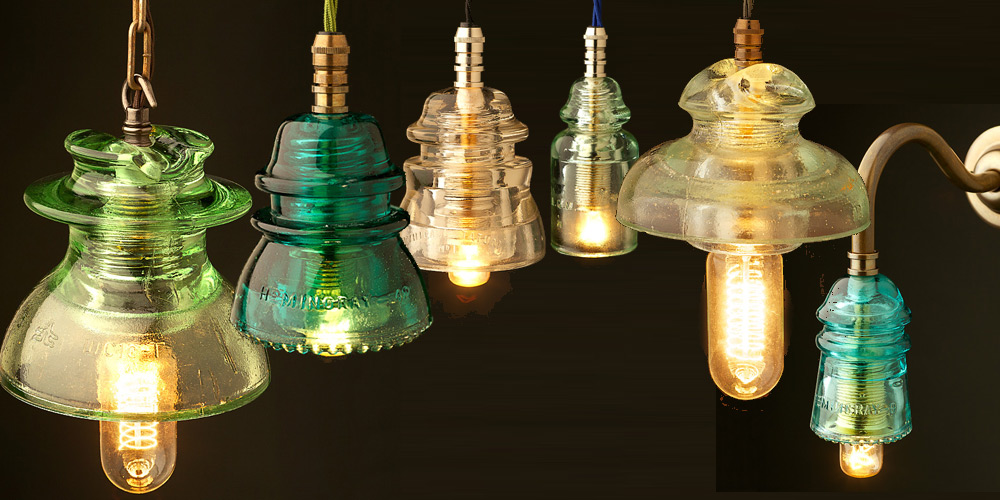 Glass Pin Insulator 240V Pendant and Wall lamps We buy insulators found in Australia, North America, and Russia. They range in size from 30mm telephone system insulators up to the large high tension types of up to 300mm. They are cleaned in a caustic bath and sorted into matching color and size. Some have chips and scratches and overall quality does vary. We reject any that are too damaged but their appeal is in the history they represent. A hole is drilled in the top and an allthread cut to length is fitted to a lampholder so that a cordgrip mechanism can be fitted! Ensuring that the wiring cannot be pulled out under load.

Pin insulators are almost always deployed in the open air, so isolation when wet is a major consideration. To combat this problem, pin insulators feature extra skirts or wide shells to increase the surface distance between the conductor and the pin. The “pin” is typically a wooden or metal dowel of about 3 cm diameter with screw threads. The pin insulator has threads so that it can be screwed onto the pin. A typical pin insulator is more than 10 cm in diameter and weighs one kg or more. Size depends on the voltage to be isolated and the weight of span of wire to be supported.

These electric supply pin insulators have been manufactured all over the world since the 1800’s as electricity distribution grew to supply the growing demand to power everything from the electrification of suburbs to the power for transport and industry. Bare wires transport power from generators through a distribution grid over high tension, high voltage lines and power poles everywhere. Molded glass became the standard material for this purpose as is was plentiful and fairly straight forward to manufacture. The first electrical systems to make use of insulators were telegraph lines; direct attachment of wires to wooden poles was found to give very poor results, especially during damp weather. The first glass insulators used in large quantities had an unthreaded pinhole. These pieces of glass were positioned on a tapered wooden pin, vertically extending upwards from the pole’s crossarm (commonly only two insulators to a pole and maybe one on top of the pole itself). Natural contraction and expansion of the wires tied to these “threadless insulators” resulted in insulators unseating from their pins, requiring manual reseating. Amongst the first to produce ceramic insulators were companies in the United Kingdom, with Stiff and Doulton using stoneware from the mid 1840s, Joseph Bourne (later renamed Denby) producing them from around 1860 and Bullers from 1868. Utility patent number 48,906 was granted to Louis A. Cauvet on July 25, 1865 for a process to produce insulators with a threaded pinhole. To this day, pin-type insulators still have threaded pinholes.

The Hemingray Glass Company operated factories in Kentucky and Indiana between 1848-1972 and was the largest manufacturer of glass insulators in the world. The Hemingray 42 was one of Hemingray’s most popular and prolific insulators. These were manufactured by the millions, so most are extremely common. Those “bumps” at the bottom of the insulator are called drip points. Hemingray patented drip points on May 2, 1893 as “teats” for drawing moisture off of the insulator. Hemingray produced two styles of drip points, sharp and later round drip points. This one features sharp drip points. Whilst there are many examples of insulators and they are becoming a unique collectable, this style is so common as to make re-purposing an interesting proposition.

Australian Glass Manufacturers Co Ltd (1922 – 1939) registered in Victoria in 1922. The company changed it’s name to Australian Consolidated Industries Ltd, in 1939, to reflect diversification into building products The clear greenish glass of this insulator is reasonably common and 6 of slight variation in shade in stock at present.

The Whitall Tatum Company, or Whitall Tatum, was one of the first glass factories in America. Located in Millville, New Jersey, it operated from 1806 through 1938. The location was ideal for making glass because silica-based sand is plentiful in southern New Jersey, the Maurice River flowing through Millville provided a source of water, and plentiful forests provided energy for industrial processes. The Millville glass works was founded by James Lee and went through several changes of ownership. In 1838, John M Whitall became a partner in the business. He lived in Philadelphia and worked at the company’s headquarters there. In 1845 after his brother Israel Franklin Whitall joined, the firm became Whitall, Brother & Company. Later, Edward Tatum also joined the partnership and in 1857 the name was again changed to Whitall Tatum & Company and later in 1900 to Whitall Tatum Company. I.F. Whitall and Edward Tatum headed the company after John M Whitall retired in 1865, and the ownership was passed to their descendents. Whitall Tatum did not enter the insulator manufacturing market until around the time that Brookfield Glass Company closed it’s doors, that is, in 1922. However, they made up for lost time by producing millions of them during the ensuing years. Armstrong Cork Corporation purchased Whitall-Tatum in 1938 (with insulator production continuing at a remarkable rate, and the existing molds eventually being re-engraved with the ARMSTRONG name), and finally Kerr Glass Manufacturing Corporation took over in April of 1969. Many of the insulators continued to carry the “Armstrong” embossing, until about 1973, by which time all carried the “KERR” embossing.

We wire mostly with E14 240 Volt lampholders but the larger high tension examples can be wired with E27 type lampholders. We have included smaller insulators on wall lamps and a large variety of combinations are possible in this type of lamp.