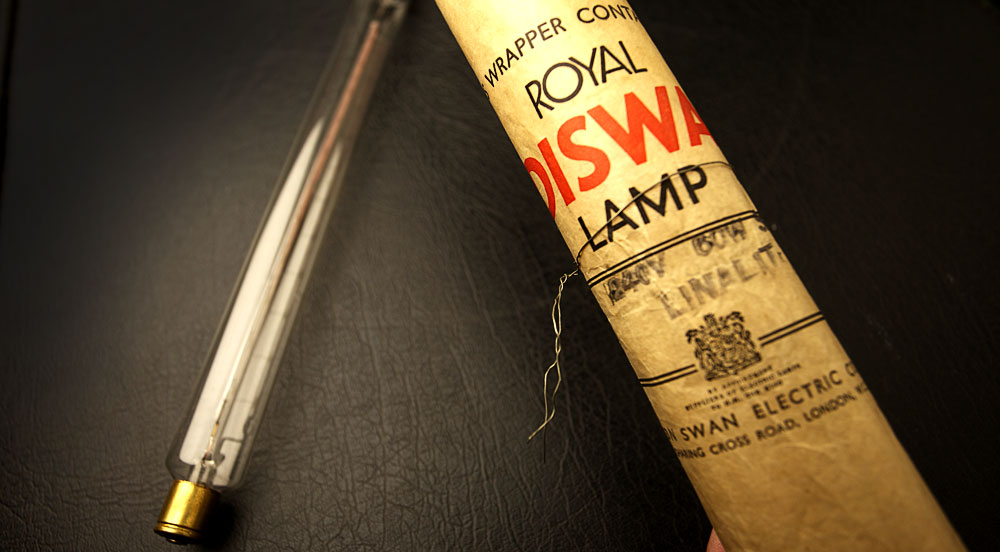 An original Edison Swan Electric Co Ltd Lamp turned up in an estate this week and we were lucky enough to examine the contents and packaging.

There is a great deal of quite interesting history surrounding this particular lamp and the Johseph Swan Thomas Edison corporate and scientific relationship. The light globe we have is a 240V 60W tube lamp made “By Appointment to His Majesty The King” around the turn of the century at 155 Charing Cross Road London marked Royal EDISWAN Lamp. It looks to be a special purpose long filament lamp perhaps for scientific or industrial use having non E27 cap of fairly plain connections at each end of the tube. It is a Small Central Contact Patent Central Contact Holders or SCC Cap

In the year 1883 the Edison & Swan United Electric Light Company, Limited was formed. The lamps manufactured by this company were marketed under the trade name “Ediswan.”

Sir Joseph Wilson Swan (31 October 1828 – 27 May 1914) was a British physicist and chemist, most famous for the invention of the incandescent light bulb before its independent invention by the American Thomas Edison. Swan’s first demonstration of the light bulb was at a lecture in Newcastle upon Tyne on 18 December 1878, but he did not receive a patent until 27 November 1880 (patent No. 4933) after improvement to the original lamp. His house (in Gateshead, England) was the first in the world to be lit by a lightbulb, and the world’s first electric-light illumination in a public building was for a lecture by Swan in 1880. In 1881, the Savoy Theatre in the City of Westminster, London was lit by Swan incandescent lightbulbs, the first theatre and the first public building in the world to be lit entirely by electricity.

The common coupling of the name of Swan with that of Edison in connection with the incandescent electric lamp has often led to the notion that Swan collaborated with Edison in this invention. That was not so. Their work was completely independent, and although they knew that each of them was at work on the problem of devising a practical lamp, neither of them had either met or held any communication with the other. The conjunction of their names come about in 1883 when the two competing companies merged to exploit both Swan’s and Edison’s inventions.
In America, Edison had been working on copies of the original light bulb patented by Swan, trying to make them more efficient. Though Swan had beaten him to this goal, Edison obtained patents in America for a fairly direct copy of the Swan light, and started an advertising campaign which claimed that he was the real inventor. Swan, who was less interested in making money from the invention, agreed that Edison could sell the lights in America while he retained the rights in Britain.

While searching for a better filament for his light bulb, Swan inadvertently made another advance. In 1881, Swan developed and patented a process for squeezing nitro-cellulose through holes to form conducting fibres. His newly established Swan Electric Lamp Company (which by merger was to become the Edison and Swan United Company) used the cellulose filaments, that Swan had invented, in their bulbs. In 1878, Edison applied the term filament to the element of glowing wire carrying the current, although the English inventor Joseph Swan had used the term prior to this. Swan developed an incandescent light with a long lasting filament at about the same time as Edison, as Swan’s earlier bulbs lacked the high resistance needed to be an effective part of an electrical utility. Edison and his co-workers set about the task of creating longer-lasting bulbs. In Britain, Joseph Swan had been able to obtain a patent on the incandescent lamp; though Edison had already been making successful lamps for some time, his patent application was incompletely prepared and failed.

It is an interesting story and one that showed a reasonable approach to the creation of a new industry where both inventors collaborated and were rewarded for their efforts. Quite different to the Patent wars that are being waged currently in the Computer and IT industries.

It is fascinating to read the packaging on this old lamp, in particular the IMPORTANT notice that states,

“In view of the paper shortage, this wrapper should not be thrown away or destroyed but should be handed to the local authority or organizations responsible for salvaging paper” Nice to see there was package disposal advice that long ago.

We can still get a lamp if this sort of size and shape as it is made carefully by hand currently in Switzerland. The 280mm 60W 240V tube lamp is one we are currently designing a wall fitting for and the rough drawings should be available in the very near future.