Russian Fluted Insulator E14 pendant is an upcycled power cable insulator made in China for Russian power grid having a wired in E14 lamp holder and cordgrip mechanism.

Wired with 3 core cable in braid and an E14 brass lamp holder with cord grip mechanism, the bulb sits just inside the glass. Any E14 bulb including newer LED’s will fit this lamp and any combination of cable color cord grip color is also an option.
Recommended bulbs are listed below

When selected as 120Volt version the pendant will be manufactured using  UL Listed E12 Bakelite socket and cable, and a 4″ J-Box canopy can be supplied 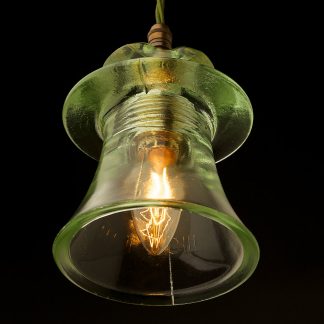