12 Volt TRIAC dimmable constant voltage LED driver for powering our 12 Volt LED globes on your lighting system. When using 12V LED’s for a bathroom solution choose a driver with enough power to cover the total wattage required. You should consult an electrician prior to ordering to make sure you have the correct driver for the task.

We manufacture 12 Volt LED’s for use where low voltage is required in areas of where fittings might come into contact with water. These globes require a constant voltage, supplied by a separate LED driver. These TRIAC dimmable LED drivers provide a retrofittable dimming solution, since the existing switch and dimmer can be used to control dimming of these low voltage globes. In fact, they can be used with either leading edge or trailing edge dimmers.

These drivers are designed to be used with leading edge or trailing edge dimmers wired on the 240V side.

Traditional TRIAC dimmers, also known as phase-cut dimmers, were designed for resistive loads such as incandescent or halogen lights. Originally configured as leading edge, they were the standard dimmers used, and so in legacy situations, there will most likely be a TRIAC dimmer installed. Unfortunately, these leading edge dimmers are not readily compatible with modern LED globes, as LEDs do not appear as a resistive load. Therefore, LED based solutions using a standard style LED driver will not perform as expected with a TRIAC wall dimmer. For example, our retrofit 240 Volt LED’s require a trailing edge dimmer as a replacement for the traditional dimmer. 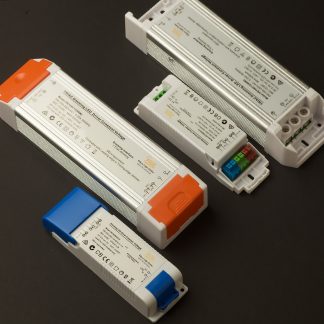